Monumental Grotesk is a true The Hague typeface: its stone-carved forms grace a few buildings and a monument in the government quarters. It’s based on the work of graphic designer Piet Zwart, a Dutch Bauhaus proponent.

Zwart used a similar style for a range of posters for a rubber floor manufacturer (which Ian Lynam referenced in his font Rubber Vloeren), but where those letters look severe, his design for Berlage is almost cosy. It’s an incredible contrast, and it was the stone letters that I wanted to bring to life.

In honour of her majesty’s 25 year reign
We celebrate today the unveiling of this monument
A momentous occasion!

The default style of diacritics is placed above the glyphs, but an OpenType stylistic set cuts the diacritics to be inset into the glyph.

Monumental Grotesk comes as an all-caps font with a few smart features. It has discretionary ligatures and an alternate style of diacritics that are inset into the glyph shapes. It follows the language support of all Tiny Type Co. releases. 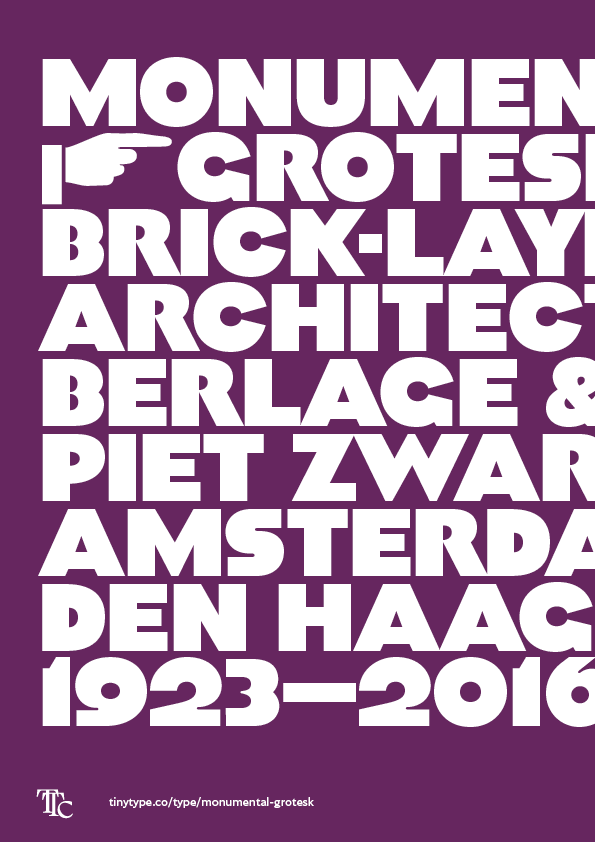