Dover Text is the natural companion to Dover Display: where Display is best used big, Dover Text shines at sizes down to 8 points, or 12 pixels. The six styles work together in ways that Caslon and Gill Sans – Dover’s grandparents, you might say – never could.

While commonly people label sans and serif grouped styles as a ‘superfamily’, in the case of Dover Text, sans and serif are direct companions. The sans can be used as an emphasis style for the serif, for example, and all the functionality of the fonts is identical. Small caps, tabular numbers and language support are matched completely.

Dover Serif Text: rhythmic, calculated, simple.
An italic with a strong slant provides a lively texture to the page.
The bold weight is unmistakeable and provides a clear layer of distinction.

Dover Serif Text is based off of Haas Caslon, a German interpretation of Caslon’s smaller types. But where the reference material is a bit stuffy, Dover cleans it up. Historic reference is indispensable for understanding some of the stranger decisions, and with a thousand glyphs per font, it helps that Caslon goes far, far back. However, the many Caslon interpretations that exist may stand on a few centuries of history, but there is no need for a new version to look old.

Dover Sans Text: geometric, modern, made for small sizes.
Geometric fonts don’t need to be stiff – this italic flows.
Unlike its spiritual forebear, the Bold is even and monolinear.

Dover Sans Text is an attempt at channeling Gill Sans, but applying the design principles to the proportions, letter skeletons and functionality of Dover Serif Text. Certain details from Eric Gill’s work shine through, but Dover Sans Text references more of the sketches and lettering than the final fonts he delivered for Monotype. Notable examples of Gill designs that were cut from the production are the lowercase a tail, which is much more in line with the overal alphabet, and the flowier italic, best exemplified by the e.

Two other meaningful differences are the increased x-height of the fonts, matching the bookishness of the serif, and the low contrast of the bold weight. Together, these three styles do what most book typefaces need.

While bathing, Antinous was seen by Minerva, who was so enamoured of his beauty that, all armed as she happened to be, she descended from Olympus to woo him; but, unluckily displaying her shield, with the head of Medusa on it, she had the unhappiness to see the beautiful mortal turn to stone from catching a glimpse of it. She straightway ascended to ask Jove to restore him; but before this could be done a Sculptor and a Critic passed that way and espied him.
“This is a very bad Apollo,” said the Sculptor: “the chest is too narrow, and one arm is at least a half-inch shorter than the other. The attitude is unnatural, and I may say impossible. Ah! my friend, you should see my statue of Antinous.”
“In my judgment, the figure,” said the Critic, “is tolerably good, though rather Etrurian, but the expression of the face is decidedly Tuscan, and therefore false to nature. By the way, have you read my work on ‘The Fallaciousness of the Aspectual in Art’?”

Dover Text is primarily designed for long runs of text (6pt–16pt in print, 12px–20px on screen), and above these sizes some modest amounts of negative tracking are recommended. The serif and sans are matched across styles: x-heights, capital proportions, but also OpenType features such as small caps and different styles of numbers are present in every style and weight.

It has a selection of useful dingbats and symbols, and very wide language support. Even more unexpected diacritic combinations can be made with the OpenType Mark Positioning feature, available in modern software.

‘Greece and the Reinvention of Politics’ by Alain Badiou

‘Halloween in Bagamoyo’ by Bladed 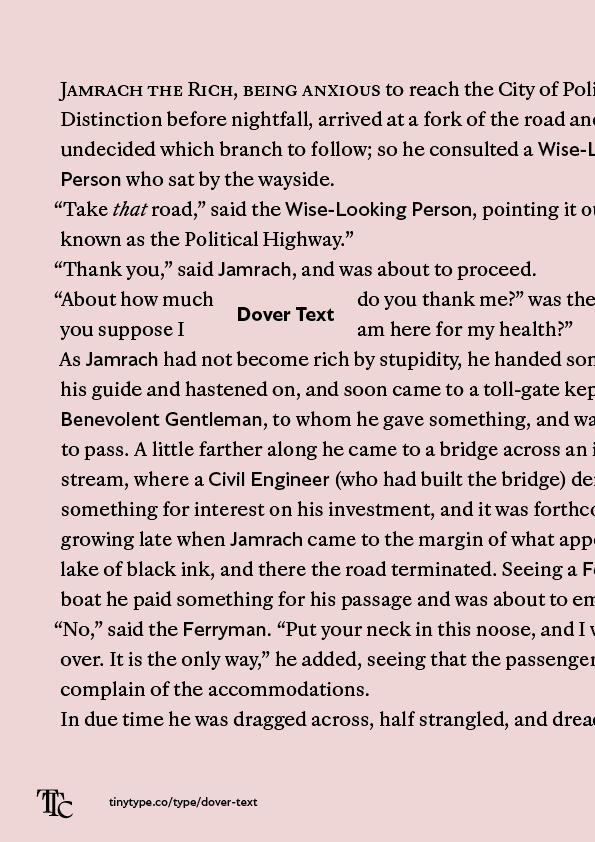